Thanks to the RAB Trust I was lucky enough to be awarded a combination of the book ‘1520-1724 Liutai In Brescia’ along with a workshop placement with Helen Michetschläger in Manchester. The book allowed me to get to grips with an area of making that had already piqued my interest and provided a wealth of information that also informed me on aspects of design and proportion that came in useful later in the year whilst beginning work on a project to reconstruct a 17th century Bass Violin from measurements.

In October 2015 I made my way to Helen’s workshop for 5 days taking with me some existing work in the form of a new viola and a recently completed viola. Whilst there it’s safe to say I learned a great deal, and as someone setting out to become a self-employed maker it was incredibly useful to learn from Helen who is a well established and highly respected maker.

Wasting little time we hit the ground running and began with overhauling the viola I had completed, evaluating and improving the neck shape and taking the opportunity to experiment with some new methods of colouring and finishing the neck.” 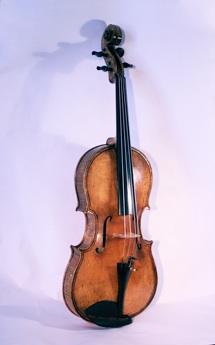 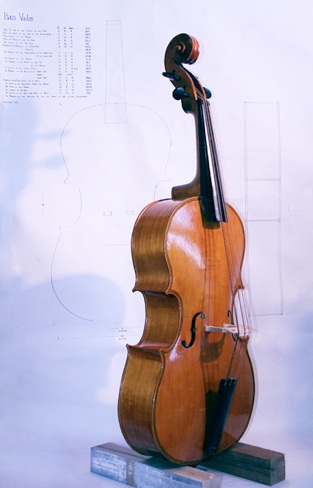 From here we moved onto arching and hollowing the plates I had brought along, using scrub planes to complete the bulk of the work – the planes were entirely new tools for me – and employing a completely new method of fixing and holding the workpiece. This showed me a completely different approach to what I had previously been taught and one that I have both modified an incorporated into my own workshop, vastly improving my efficiency.” 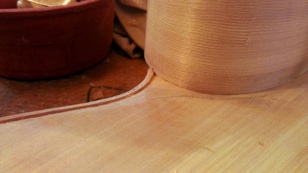 The week ended with the purfling channels being cut into the completed plates and a new bridge for the viola which was completed just in the nick of time to make the run to the train home.
Amidst the work we managed to discuss several points of interest around being a self employed maker which proved at least as valuable as what was learned at the bench.

In 2016 I was again given an award: both the British Violin book and also the funds to purchase a new set of peg fitting tools. The book was a vital component of what is now an ongoing research project into early instruments http://www.the8ftproject.com/ that was started with the construction of an English Bass Violin and is set to continue with other more unusual offerings. The tools were an essential part of my toolkit which I had not yet been able to afford and essentially allowed me to begin my own workshop straight out of school, which is where I find myself now having settled for the moment in my hometown of Newark.”