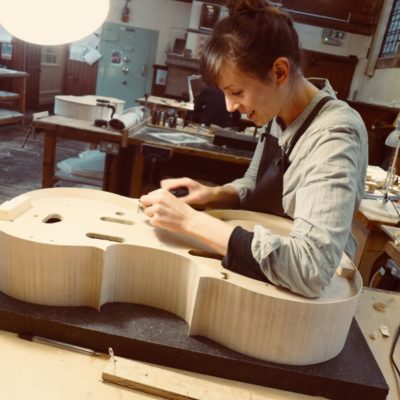 “Based in Ramsgate since 2001, Shem Mackey has been recently described as ‘one of the world’s top makers of violas da gamba as well as being a scholar of the instrument’s history and construction’ (Ramsgate Recorder). I really wanted to learn more about the English tradition of viol making and there was no better place to go for that. I wish to express my gratitude to the RAB Trust, which introduced me to him and allowed me an unforgettable experience.

I am particularly interested in historical instrument making, which consists of paying attention to the larger context of an instrument’s birth, the time when it was built. Examining the whole environment in which those early makers thought, worked and lived gives a better understanding of their creative process to the contemporary maker.

One single example – taken from my week with him – sums up the very well-balanced approach of Shem, using both theory and practical knowledge :

While adjusting the fingerboard (with a veneer) on the neck of a bass viol, he realized that the measurements were exactly the same as the ones of the genuine instrument he was inspired by. This shows that he so deeply understood the way the maker worked, that he spontaneously used the same making method – which lead to the same result. Without intending to achieve a slavish or perfect copy by blindly following the information provided by the original.

His long experience as a tutor at West Dean College makes Shem Mackey aware of the complex learning process of such a craft. I really did appreciate his inspiring guidance and the peaceful atmosphere in the workshop. He helped me get more confidence in my work, and taught me how to engage with a new working method without having a previous full understanding of it.

Project for the week

I worked on a treble viol (390mm long) based on Mackey’s own model inspired by instruments from the beginning/mid 17th century.

With his help and advice,  in five days I managed to achieve the bending of a multi-staved front, the thicknessing of the plate and the drawing/pre-cutting of the ‘C’ holes.

Just one of the many enthralling articles Shem Mackey made me read explains the basic principle of bending fronts ( Dietrich Kessler in the Dartington Violin Conference, 1999)  :

‘You take a slat of wood, preferably split wood so that the grain runs absolutely straight and you bend it into a shallow curve. It is then fastened onto a board. We fastened the middle stave with screws to the board. We then took the next strip, which is bent to fit the middle strip curve on one side. The bending of this side is quite complex. The edge that is fitted to the centre stave has a simple single shallow curve. The other edge ends up having two curves accommodating the dip in the middle bout where the ‘C’ hole comes. The other side is done in a similar fashion. Then all that remains is to attach four wings all around. You obviously have to plane the ridges out, but you have then got the arching. 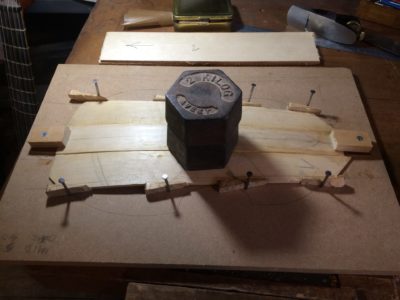 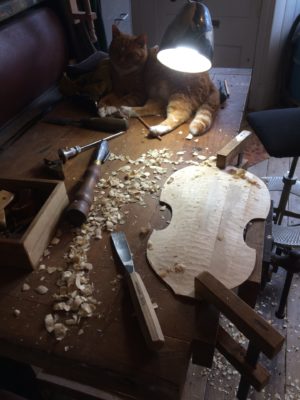 Shem explained me – amongst other things – the meaning of the shape of the Cremonese bass bar, related to a mind-blowing engineering observation based on the ‘Cremona’ framework. He also showed me the special shape and position of the bass bar in the Collichon’s viols.

For gluing bass bar we tried a genuine clamping method by using heat and a burning brand. 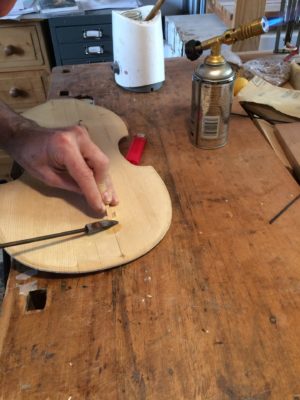 Shem very generously shared with me some of his research in different fields related to viol/violin making or gut strings, and I came back with a mountain of enthralling references to study. I am happy about the fact that we will keep in touch and I am looking forward to coming back to his workshop in order to continue and finish the treble viol.”