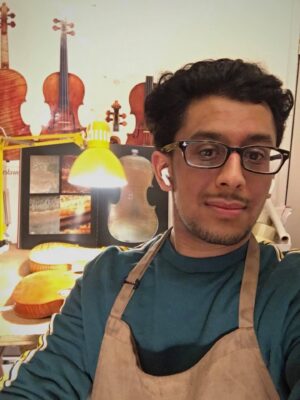 Niam was awarded funds for the book the book he requested:  ‘Carlo Bergonzi.  A Cremonese Master Unveiled’,  also funding a small scanner for archiving notes and photos + a work placement (to be arranged) 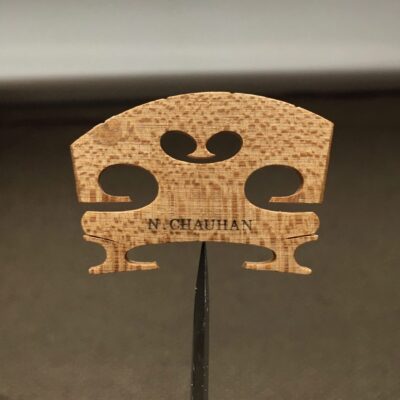 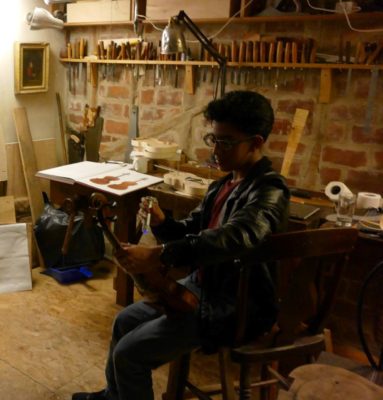 A placement was arranged with Geoff Denyer to view instruments at London auctions.

This is Niam’s report of his time with Geoff:

I would like to express my gratitude to the RAB trust for arranging me to view instruments at the London auctions with Geoff Denyer.

Being able to explore the auctions with a highly knowledgeable individual such as Geoff is certainly invaluable to me, as I have a deep-rooted interest in identification and history. We started well by getting to know each other and touching base on particular areas I wanted to look out for.

Over 2 days, we looked at the vast majority of instruments for sale, approximately 750! The attention given to these varied, however this all contributed to familiarisation, and Geoff would test me occasionally! Naturally as we went along, we discussed the instruments we saw, and Geoff frequently lent his insight; when studying a lovely Benjamin Banks cello, we talked about its key features such as its distinctive red varnish, the purfling material, and the typically done rounded pegbox top. 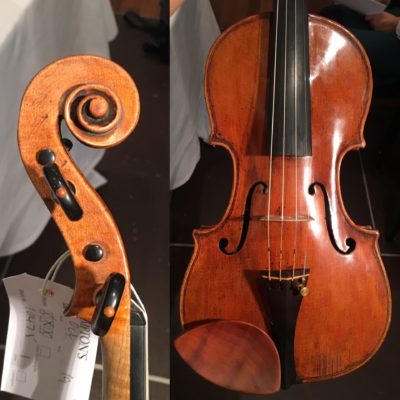 The unforgettable scroll of a G.F. Celoniatus made in Turin, 1730. 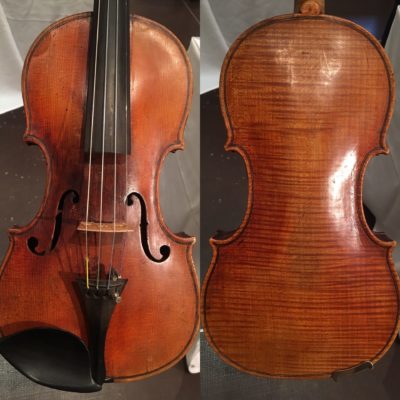 The iconic low-set swung soundholes, and the pinched corners of an example from Alessandro Gagliano’s later work, made in Naples c.1725.

There was a good selection to see in regards to important old makers: including violins by Guadagnini, Giuseppe Guarneri, Andrea Guarneri, Rugeri, and J.B. Vuillaume, amongst many others.

A particular instrument that stood out to me was a composite cello with a Brescian front dendro dated to c.1520, being sold as probably by Gasparo da Salò. With no surprise about encountering lots of people in this field, we engaged in discussion with a well-known expert from the United States about the origin of this instrument and context to its composite parts. I was able to provide photos of a similar cello which proved to be insightful. 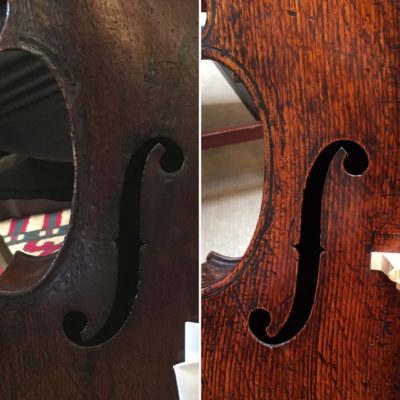 A small comparison of the Brescian cello in question against a known example by “da Salò”; note the similar soundholes. The appearance is marred by its dirty condition however, these cellos share the use of Cedar of Lebanon wood for the front (known for its striated figure). Although the left cello has double purfling, it can be seen under closer inspection that both share the same materials.

One of my main objectives fulfilled in these two days was to learn how to distinguish particular 18th to early 19th century Saxon violins from English violins of the same time. Often similar in varnish and outline, I learnt they can be recognised by:

1) The materials of the purfling (one having boxwood & often holly for the other.
2) The arching shapes, where Saxon often have full arches with flatter centres.

These two days were also used to study the wear patterns & textures of old instruments, complimented with learning about handling and restoration philosophies from the past. This strengthened my understanding of why old instruments look the way they do today!

Overall, this was a wonderful experience and I left these two days having gained a broader perspective with new ways of thinking about identification and history. Truly invaluable! I would like to once again extend my thanks to both Geoff Denyer and the RAB Trust.