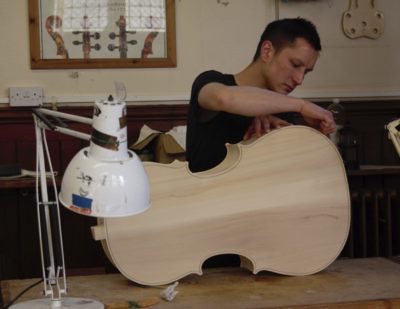 In lieu of the work placement awarded this year, the RAB Trust have awarded extra funding for tools to help working at home.

The funding I received for the reamers equipped me not only with the tools themselves, but also with the means to economise by making my own nifty thrifty peg shapers. 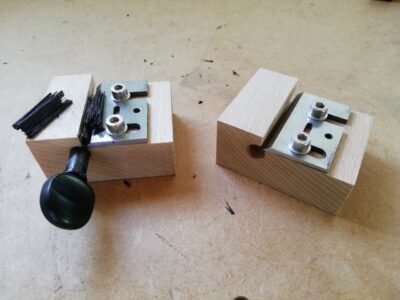 The cost of the materials I needed for these – a block of sturdy beech, Makita electric planer blades, coach bolts and washers – came to less than £20 all told, which is a considerable saving on any commercially available shapers. For a tool which, despite its necessity in the violin-making world, is basically a glorified pencil sharpener, prices can be staggeringly high; and though some examples are beautifully engineered, ultimately, functionality is what matters most. Having tried many of the different varieties of shapers out there, I can state with all sincerity that these homemade ones work just as well and possibly even better.

An advantage to these I learned is that you can customise the cutting height relative to the hole, and sharpen the blades to a steeper angle than generally provided as standard with off-the-shelf shaper blades, imparting more of a scraping than a slicing action in use.  As well as giving a nice finish with reduced risk of tearout, this means that if the grain doesn’t run evenly down the peg, the cut will not follow that off-centre and leave you with a dispiritingly wonky, potentially wasted peg.

Although it obviously involves a bit more graft to put these together than simply placing an order, I would wholeheartedly recommend this approach to any impecunious (or wealthy but miserly!) budding makers – you too can revel in the satisfaction of saving money by making your own cheaper and more effective tool!  Again, all my gratitude to the RAB Trust for making this possible for me!”