RAB Award 2022:  Thomas was awarded the book ‘Stradivari Varnish’ by Brandmair & Greiner and a work placement at Florian Leonhard.

I worked alongside Melina (head maker) and Sam (maker) whilst attempting to make an exact copy of a Gasparo da Salo viola scroll of which I had a cast and plenty of photos. It was great having the different experience and outlook of both makers as it gave me a lot to think about and new ways to look at what I was doing. I also worked in a way I had never worked before and I really enjoyed that.

I also opened a cello whose back seam was unglued and fitted five tower clamps to prepare for re-gluing the joint as well as some other set up work and minor cleaning. It was interesting to see how the thinking was sometimes different in both the making and restoration workshops and it has given me motivation to give more time to restoration so I can learn techniques that I can apply to antiquing and making copies.

A huge thank you to the RAB Trust for giving me this amazing opportunity. I’m so grateful. 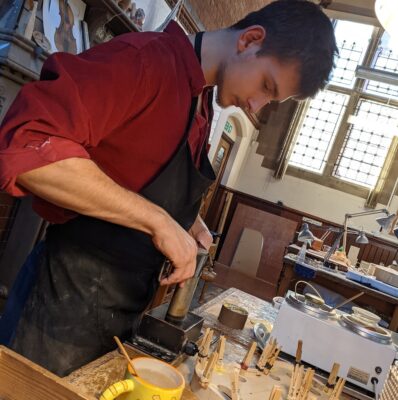 Thomas was awarded funds for a bending iron + Herdim closing clamps from the Jim Reid bequest. Having used both items for several months, this is what he says:

I was lucky enough to receive some Herdim closing clamps from a bequest as well as funding for a bending iron. Since receiving the closing clamps I have used them to close 3 or 4 violins, as well as using them in repair work and other day-to-day tasks such as fingerboard alignment when gluing. I feel so lucky to have received the clamps and thanks to the RAB Trust I will have these great tools for decades to come.

The bending iron that I bought with the award money also gets more than its money’s worth of use. I must have made 5-6 rib structures using it for both ribs and linings, and it’s a breath of fresh air knowing that I have it there ready instead of having to work around times to plan when I have access to one. Thanks again to the RAB Trust, another quality tool to add to my collection that will get used all my life!