In the winter of 2018 the RAB Trust received a message; a donation of a part-made cello and some tools was waiting for us in Lytham St Anne’s, Lancashire. RAB Chair Helen Michetschläger made the journey from Manchester on a freezing day in February 2019 to pick everything up; fish and chips by the snowy beach was a bonus! 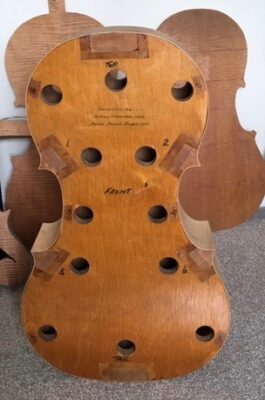 This cello had been begun in 1971 by Arnold Boyes, who lived in Yorkshire.  He had been a cabinet maker in his working life and in retirement was able to devote as much time as he wished to his interest in violin making. He worked with application and seriousness and made over a dozen instruments. The cello was left unfinished at his death; the rib assembly was made save for the linings, and the back and front had been roughed out. The quality of work on the ribs was good and it seemed well worth finishing the cello as a project to raise funds for the RAB Trust. We soon had willing volunteers; two former award winners, Sam Brouwer and Matthieu Fourrier made the head and back respectively, and RAB trustee Mark Robinson made the front, liaising closely with Matthieu so that both plates would match stylistically.

A lot happened since the spring of 2019 to hold up the project! But in 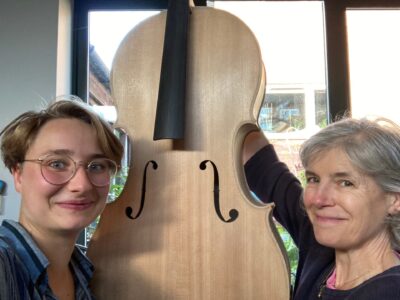 summer 2021 Helen was able to travel to London to pick up the completed back and front; Sam had already sent the head. Helen arranged a work experience placement with Newark student Alina Ehret and they spent an intensive week working together putting all the parts of the cello together and fitting the neck. It was credit to all the different hands who worked on the cello that it came together remarkably well. Helen varnished the cello subsequently and in late January 2022 set it up.

A beautiful instrument with a rich, even sound, a cello to treasure. The cello is now for sale at £24,000 at Stamford Strings in Lincolnshire; all proceeds will be used by the RAB Trust to support students of violin making.