Jason Reitenberger, a first year student at Newark, took part in a project at the Royal Northern College of Music, Manchester, where four experienced violin makers collaborated to build a cello for the college in six days. Jason’s job was to take photographs, chat to the visitors who came to watch the project, and to assume the role of a traditional apprentice; taking the opportunity to watch the whole process of making a cello at a ‘real world’ professional level alongside helping make the tea and sweeping up!  Here is his report:

I am very grateful to have had the unique opportunity to accompany the cello project at the RNCM in Manchester. A cello built in public in one week!

The cello that was crafted in this week is based on an original Andrea Guarneri from 1691. It was the fourth time the team consisting of Helen Michetschläger, Kai-Thomas Roth, Marc Soubeyran and William Castle have shown their violin making skills in public at the RNCM.

Besides making coffee or tea and preparing lunch I have observed and learned so many techniques and useful tricks that are of great value for me. I am a student currently in my first year at the Newark School of Violin Making.

In order to accomplish such a project, precise organisation is a high priority. It was fantastic to see how organised a team has to be. Also, a lot of preparation beforehand had to be done: the templates and the mould had been made, the wood had been chosen, jointed and the tools needed had been sorted before the week started.

Saturday the 27th of February 2016 was the first day of the cello project. Marc was working on the rib structure. That had to be completed at the end of the day because the rib structure was needed for taking the outline on to the front plate and back plate the day after. William was doing rough arching on the front plate and Helen on the back plate. Meanwhile, Kai was starting the scroll and later Helen prepared the fingerboard.

The next day Marc completed some final adjustments necessary for taking the outline onto the plates. Afterwards, Helen and Kai were working on the outlines and purfling. William was finishing the scroll and the fingerboard was glued on. After the outline was taken Marc trimmed the linings and prepared the rib structure to be removed from the mould.

Day no. 3 was the busiest. Marc was finishing the arching of the front plate, then thicknessed the plate and cut the f-holes. In between William was hollowing the front before the f-holes were cut. Helen finished the arching of the back plate and started fitting the bass bar. Now the edgework of the plates had been finished and William glued the rib structure on to the back plate. A long day was completed and we were exhausted.

On Tuesday the 1st of March the parts of the cello were coming together. Helen was shaping the bass bar and writing the label. William was finishing the inside of the instrument before the front was glued on. Marc was fitting the pegs and cut the slot for the saddle. Kai was shaping the fingerboard and fitting the endpin.

Day five was a day where everyone could relax a bit. A general clean up of the instrument was on the schedule and Kai was fitting the neck.

On day six the last and final day of work I observed the process of setting up the instrument. This was very interesting because it is of great importance in terms of sound production and projection. I learned how important the relationship between the bridge position, the bass bar and the sound post is.

Once the setup was complete students from the RNCM were playing it and it sounded amazing! I had a go as well and I was amazed how light it was since the back and the ribs had been made from poplar instead of maple.

All in all, I had a great time and it was really meaningful for me to see how professional violinmakers work together and to experience the routine of this profession. Seeing how problems were solved and different opinions were shared was something that I learned a lot from. I realised how many different methods could be used to achieve a very good result. Also, a day of a violinmaker does not end at a specific time. It ends when the job is done and since a violinmaker works with natural materials there are always problems that can appear. Even professionals make mistakes and learn from them. Life is a never-ending journey of learning. And that makes me happy. There is always something exciting going on!

My notebook got thicker and thicker and I got a lot of input that I am really excited to work and experiment with. A big thanks to the team! 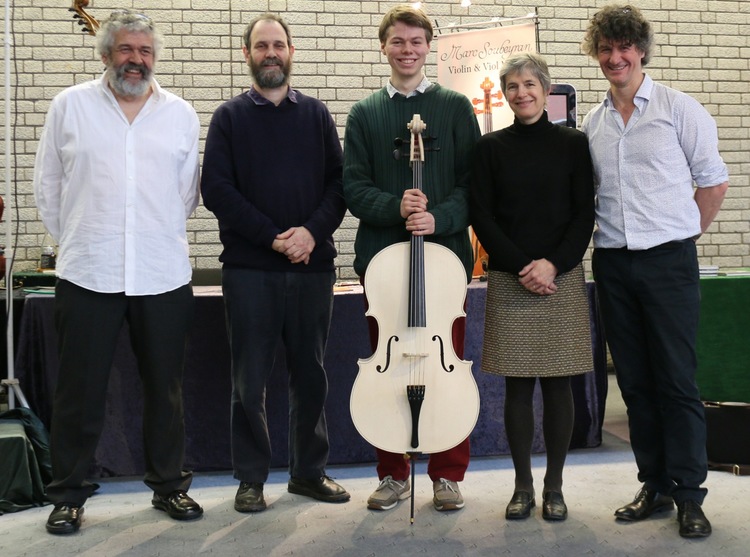