The Guardian features our former award winner Shehada Shalalda – have a read: 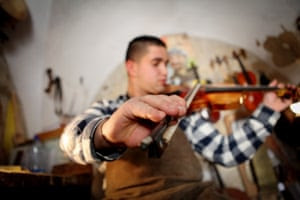 It is said that the hardest thing you can do with a violin is play Paganini.

But for Palestine’s foremost luthier, fixing instruments in refugee camps and using music to bring people together in a divided region comes a close second.

Shehada Shalalda, 28, is thought to be the only professional sanie kaman, or violin maker, in Palestine. The other luthiers in Palestine specialise in Arab instruments.

Thirteen years ago he was an unremarkable high school student growing up in the old quarter of Ramallah when he heard the aching strains of a single violin wafting up from a newly-opened music school. He was mesmerised and in that moment his life changed.

Since that day, Shalalda spent hours in the Al Kamandjati music school, sometimes skipping school to be around the sounds. There, he learned how to fix and clean instruments and how to transform a piece of wood into a violin, planing away at the edges to bring out the curves and hollows, the f-holes and the waist.

“I grew up in the middle of the war zone. I didn’t think I would survive,” said Shalalda. “Making violins offered me a way to remain alive. It was a chance to see the world and do something for my community: bringing peace through music.”

At Al Kamandjati, he met Italian violin-maker Paolo Sorgentone, who invited him to study luthiery in Florence in 2008. “When I arrived in Italy, it was a shock and a surprise to see there weren’t checkpoints and soldiers with guns in the streets as in Palestine,” says Shalalda. “My friends and I had imagined that the entire world was like our country.”

In Florence, he created his first violin. He continued his studies at Newark School of Violin Making in the UK. Shalalda returned home to Palestine in 2012 and set up a workshop in the Al Kamandjati music school, which is still just up the road from his house.

Shalalda’s instruments are sold to customers worldwide. “This is a way to show that my homeland is producing beautiful handicrafts. Palestine is known only for conflict, but we also have a strong cultural tradition,” says Shalalda, who is back in Ramallah after participating in the prestigious International Triennale Violin Making Competition Antonio Stradivari in Cremona, Italy. It was the first time a violin made in Palestine was submitted to the competition.

Bringing music where there is the noise of war moves him. He has repaired musical instruments in the refugee camps of his hometown Ramallah as well as in Sabra and Shatila in Lebanon. He plans to continue these efforts with his friend, Italian luthier Alberto Dolce. “The refugees have no potable water, no electricity. They are not allowed to work,” said Shalalda. “Music is an important tool to express their feelings, as a universal language.”

Next February, he plans to go Gaza City, and repair instruments of the few music schools left standing after the Israeli airstrike of 9 August, which destroyed the Said Al-Mishal Cultural Centre. He has not yet received permission to go to Gaza.

Almost 100 km separate Ramallah and Gaza, an hour’s car trip, but Shalalda will spend an entire day travelling as he cannot pass through Israel. He will probably have to fly to Egypt and then drive to Gaza. But he is worried that the Israeli security forces might close the borders and he will not be able to return to the West Bank, where his wife Buthaina and his three children Nabil, Juri and Omar will be waiting for him.

“Music is a powerful instrument of peace,” says Shalada. “I won’t stop building bridges between cultures thanks to these beautiful instruments, violins.”